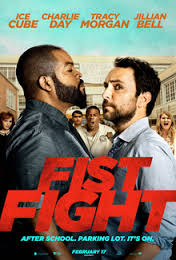 On senior prank day frustrated teachers Strickland (Ice Cube) and Andy Campbell (Charlie Day) find themselves facing termination. When things don’t go in Strickland’s favor he threatens Campbell to a fight after school. Once the news gets out the frenzy begins and Andy looks for a way out.

Immediately after I seen this film’s trailer I thought of 1987 classic “ Three O’clock High” where unlike “Fist Fight” the brawl was set between students. If you remember that film like myself you may have wondered what high school would truly be like after school.  Directed by Richie Keen (“Blake Shelton’s Not So Family Christmas” 2012) who’s familiarity with the comedic genre really helps this films chuckle ratings in theaters. From the beginning of the film I questioned much of the poor acting; from cast members to the oh so often typecast Ice Cube. See his role in Fist Fight isn’t to far off others he’s played from 1992’s “Trespass” to 2012’s 21 “Jump Street”, but with the title of teacher in this most current. That’s not to discredit any of his accolades by any means. For me one of his most memorable scenes on film was in 1991’s “ Boyz n the Hood” during it’s final scene Doughboy (Cube) walked up to Tre (Cuba Gooding Jr.) and as they talked said “ Started thinking man, either they don’t know, don’t show, or don’t care about what’s going on in the hood.”. It was from that epic scene where I felt sky’s the limit for Cube’s acting potential. Co-star Charlie Day was perfect for the timid nature of his character, although you couldn’t help but compare to his character in 2014’s Pacific Rim. This film was straight from the book of nostalgia considering the “R” rated content revolving around high school students falling in with movies like “Super Bad” (2007) and “American Pie” (1999). If you’re a fan of the genre then you’ll be satisfied in knowing Fist Fight keeps the tradition. Although I laughed quit a bit through out the film much of the story lost my attention until you realize (a 3rd of the film in) Strickland’s reasoning for fighting isn’t as simple as first thought. I think if the plot played on that from the beginning we would have a much better story. On the more positive side there were some lessons in over coming your fears, but not through the majority of the film where it might have been a little to late.

I suggest you keep the kids at home for this film as it is rated “R” for some mature adult content. In all my expectations for this film weren’t high from the start, but surely the laughs were so I’ll give “Fist Fight” a 5.5 out of 10.