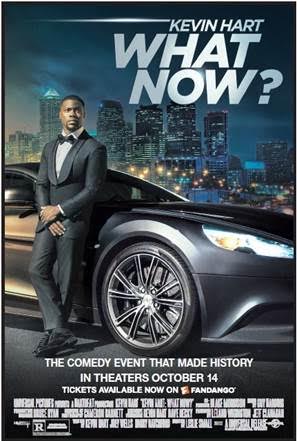 OPENS NATIONWIDE ON FRIDAY, OCTOBER 14TH . YOU AND A GUEST CAN WIN A CHANCE TO SEE AN ADVANCE SCREENING. ALL YOU HAVE TO DO IS BE FOLLOWING @BFREESTLOUIS ON INSTAGRAM, TWITTER, FACEBOOK OR BE ON THE EMAIL LIST AND STAY TUNED FOR THE ANNOUNCEMENT and/or INSTRUCTIONS.

SYNOPSIS:
In Universal Pictures’ Kevin Hart: What Now?, comedic rock-star Kevin Hart follows up his 2013 hit stand-up concert movie Let Me Explain, which grossed $32 million domestically and became the third-highest live stand-up comedy movie of all time.  Hart takes center stage in this groundbreaking, record-setting, sold-out performance of “What Now?”—filmed outdoors in front of 50,000 people at Philadelphia’s Lincoln Financial Field—marking the first time a comedian has ever performed to an at-capacity football stadium.

RATING: KEVIN HART: WHAT NOW? has been rated R (Restricted – Under 17 Requires Accompanying Parent or Adult Guardian) for some sexual material, and language throughout.